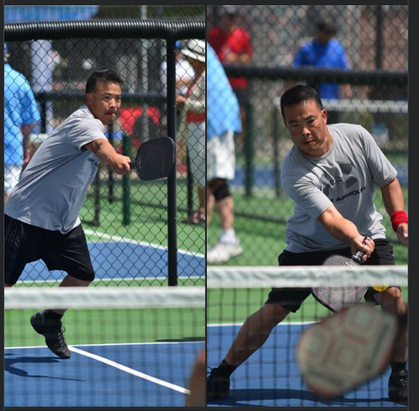 In remembrance of Kingsley Lee.

Kingsley passed away unexpectedly June of this year.  He was 51 years old.  He worked as a VP for Umpqua Bank.  He frequented SASF when he found time to drop in for a game of pickleball.  He met some great people there and I’m sure he made many friends as well.  He picked up pickleball a few years back when his sister introduced it to him.  He really loved the game that brought him back to his tennis roots.  Kingsley was on the tennis team at Kennedy High many years ago.  Once he got up to speed on the game he wanted to start playing in tournaments, likely because he missed playing in a competitive sport.  He challenged me to play as his doubles partner and I begrudgingly accepted after much teasing.  We didn’t do very well in our first tournament at Rusch park in Citrus Heights.  We did not even place, but we learned from our mistakes and it stirred up his competitive juices.  We’ve won our fair share of medals after that.  He loved the game and talked about it to anyone who would listen to try it out.  He became a pickleball ambassador for the USA Pickleball Association to help spread the word.  He even successfully lobbied to bring pickleball to the local Elks Lodge.  He volunteered his time to help referee local tournaments which is a thankless job as I have often told him.   Making a final call on a play will always upset someone.  He made up for it when he was on the court.  He made it his job to make it fun for everyone who got on the court with him.  He was a generous person through and through.  He took pride in being able to help others on and off the court.  He was friendly and kind and have always tried to get to know everyone.  All this I already knew, but what surprised me was the enormous positive impact he has made.  He touched so many people as shown by the outpouring of sympathy that I’ve witnessed.  I am truly humbled by this and I am proud to call him my brother and my doubles partner.  I guess we will never get to that 5.0 pickleball tournament rating he was working towards but I’m happy to have come along for the ride.